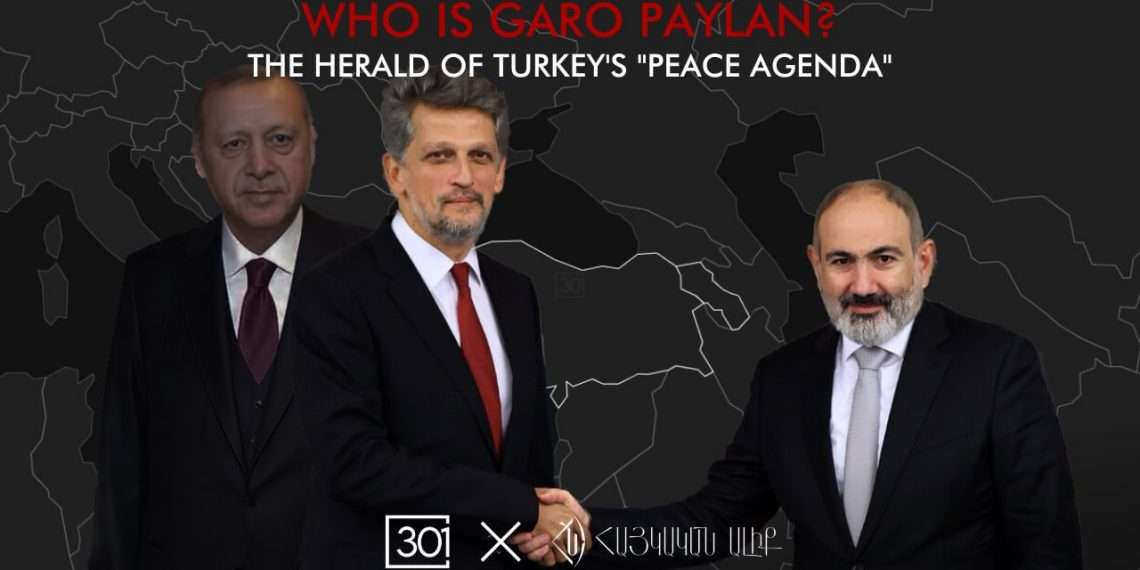 On November 2, an Armenian member of the Turkish Parliament, Garo Paylan, traveled to Armenia for a visit that caused both positive and negative reactions. To better understand who Garo Paylan is and whether he should be considered a prominent national figure, the “Armenian Wave” took a closer look at his activities and rhetoric from an analytical lens.

Garo Paylan is a Turkish citizen of Armenian origin. Since 2015, he has been a deputy in the Grand National Assembly of Turkey. He was born, raised, and began his political career in Turkey. He was elected as a deputy representing the left-wing People’s Democratic Party, a pro-minority party in Turkey that works actively to defend democratic principles. Paylan’s entire political career has been dedicated to the democratization of his state, which is Turkey, and along the way, he gained the most significant political dividends because he is ethnically Armenian, which made him a target of persecution in Turkey. Most recently, Paylan’s name gained significant traction when in 2016, he was attacked in the Turkish Parliament after a fight broke out. He was labeled “an Armenian bastard.”

Paylan, the Armenian Genocide, and the “peace agenda”: before and now

In 2015, recognition of the Armenian Genocide was Garo Paylan’s primary objective. In an interview shortly after his election to the Grand Assembly, Paylan, referring to Armenian-Turkish relations, stated that there cannot be recognition of the Armenian Genocide without preconditions. In particular, he noted the following: “First of all, Turkey should accept responsibility for the crime of the genocide, the issue of Armenian identity should be clarified, and hostility towards Armenia should be put to an end.” In the period that followed, Paylan distinguished himself apart even more with speeches and rhetoric condemning the denial of the Armenian Genocide. Despite all of this, Paylan never spoke directly about the right of the Armenians of Artsakh to self-determination, and he never accused Azerbaijan of launching an attack against Artsakh during the 2020 Artsakh War. He instead called on the Grand National Assembly of Turkey to “take responsibility for ending this war, which has become a new disaster for the Azerbaijani and Armenian peoples, and establishing lasting peace.”

Now, when Turkey and Azerbaijan are trying in every possible way to put pressure on Armenia to give up Artsakh and any demands for international recognition of the Armenian Genocide while pushing for a corridor through the sovereign Republic of Armenia connecting Azerbaijan to Turkey, Paylan “for some reason” decided that it was possible to open borders “without preconditions.” And afterward, Turkish hostility towards Armenia was replaced with “some prejudices between Armenia and Turkey.” And in recent days, Paylan has already been in Armenia with the mission to push forward the Turkish agenda and to spread narratives like “we lived together for a thousand years” and “even Turkish nationalists have changed now; they treat me better.”

Regarding this last statement, it’s essential to recall that just in April 2021, when Paylan protested the naming of a street after Talaat Pasha, Turkish right-wing politician Ümit Özdağ called Paylan shameless and provocative and threatened him with another genocide by tweeting the following, “you’ll go through a Talaat Pasha experience when the time comes; you should go.”

Therefore, receiving dividends and votes thanks to the recognition of the Armenian Genocide and as an ethnic Armenian who has been persecuted in the Turkish Parliament and has special significance in Turkey, Paylan has arrived in Armenia to convince the Armenian people that the “peace agenda” is a good one. He does this intentionally without mentioning that this “peace” will be made at the expense of Armenia’s vital interests. In reality, there will be no peace but the disarmament of Armenians and the final blow to Armenia and Artsakh.

“We are stronger now, and we must take advantage of this window for peace,” stated Paylan in an interview, not specifying to the Armenian viewers that the “we” he is referring to does not include the citizens of Armenia and especially Artsakh. “Them,” Paylan, and the Turkish side are much stronger and, therefore, in a rush to legitimize and preserve what has occupied following the war two years ago, plus more at the negotiating table.

In the context of all of this, the question arises as to why the media affiliated with the de facto authorities of the Republic of Armenia and its satellites, both small and large, have attempted to portray Garo Paylan as this advocate and representative figure of justice. Sometimes they’ve even tried to Armenify his name by calling him Palyan instead of Paylan. In contrast, in the case of Russian Armenian Margarita Simonyan, they have demonized her and have started petitions to remove the “yan” from her surname.

Despite both having Armenian roots, both are citizens and political figures in their respective countries, Turkey and Russia. Both are guided by the interests of their countries in matters related to Armenia, and it is difficult to blame them for it.

Just a few days ago, Simonyan was banned from entering Armenia. At the same time, Paylan was welcomed and even met with different Armenian political officials, including the Prime Minister, the President, and the Speaker of the National Assembly. The reason is straightforward: the interest of the de facto authorities of Armenia and Paylan in promoting Turkey’s influence while eliminating Russia’s influence aligns with each other. Both sides perceive the Artsakh issue as an “obstacle” in Armenian-Turkish relations and are ready to sacrifice the Armenian interest for “peace” and Russia’s withdrawal from the region. Paylan, preferring the interests of the country he is a citizen of to the interests of another state, does nothing unusual. The strange fact is the positive sentiments of the Armenian society towards Paylan which is a direct result of pro-Turkish propaganda carried out in Armenia at the state level. This is what needs to be combated.