What you should know about Russian-Turkish relations? - ARMENIAN WAVE
Essay 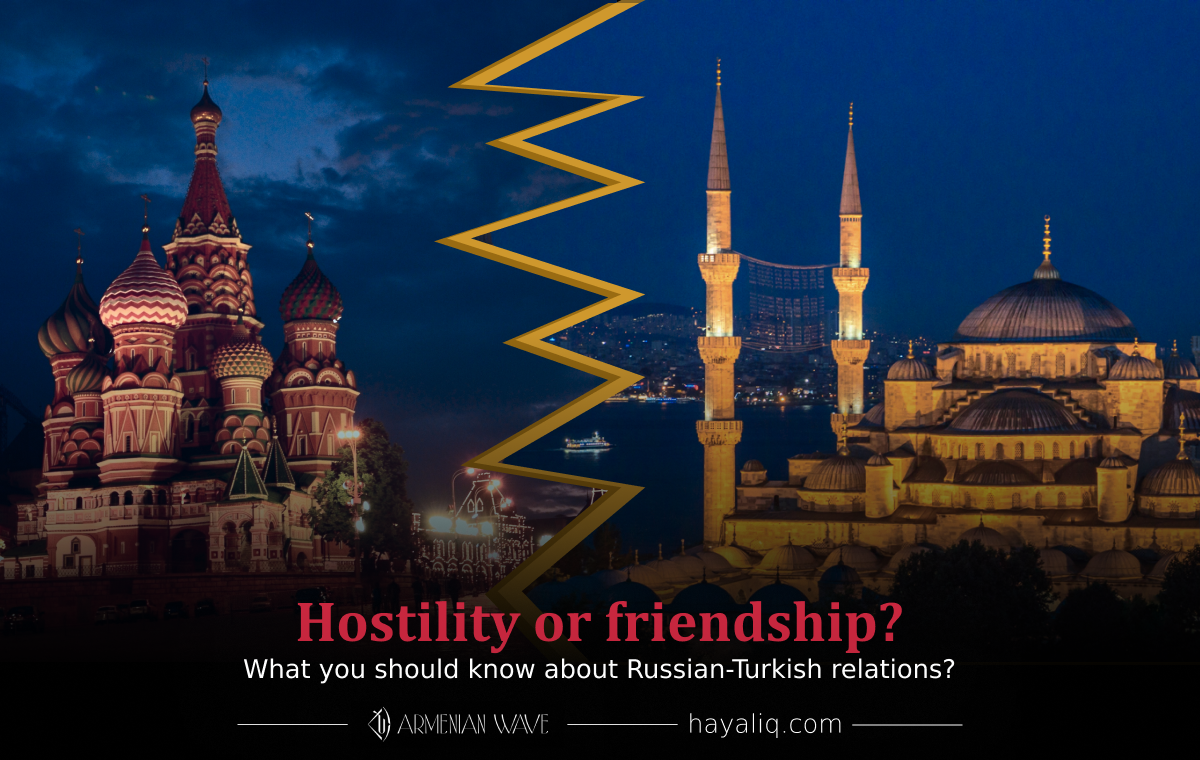 Different and contradictory opinions and interpretations about Russian-Turkish relations are widespread in the modern Armenian political field. There is a widespread opinion in society that Russia and Turkey are enemy states, while another group of people believes that these two states are cooperating, moreover, not only Turkey and Azerbaijan but also Russia are behind all the damage and attacks inflicted on Armenia. However, these are states that have gone to war with each other 24 times throughout history, and whose interests are still clashing in many geopolitical focal points.

Does “Russian-Turkish friendship” really exist or not?

Turkey is a major regional power and Russia is a superpower. The two states have no common land border, and the water border runs through the Black Sea. And despite the certain stability and economic cooperation in their relations, the intense geopolitical struggle between the two states is going on for almost the same zones. Essentially, relatively peaceful or non-crisis phases in bilateral relations have been quickly replaced by wars. Still, in 1869 Fuad Pasha, the statesman of the Ottoman Empire described Russia as “the natural enemy of the Ottoman Empire”. The Russian Emperor Peter the Great gave another descriptive description of the Russian-Turkish conflict. “Don’t believe in three things. a woman, a Turk, a non-drinker.” The fact that Turkey has been a member of NATO since 1952 and is actually in the middle of the Western military-political alliance continues to be an essential component of the Russian-Turkish conflict. Within the framework of this logic, relations between the two states are developing, having various manifestations, from actual military conflict to economic cooperation. Today, the manifestations of this multi-layered format of the Russian-Turkish conflict can be observed simultaneously in several different zones.

What are the points where Russian-Turkish interests collide?

The Syrian conflict played a decisive role in the relations between Russia and Turkey in the Greater Middle East. In 2011, a political crisis began in Syria. Taking advantage of the turmoil in the Arab world, Turkey tried to increase its influence in the Middle East. In pursuit of larger regional goals, Ankara began to put pressure on the government of Bashar al-Assad, jeopardizing relations with Damascus and supporting armed rebel groups. Turkey’s success in Syria meant strengthening Turkey’s position in other adjacent zones, including the South Caucasus and Central Asia, which would create new threats to Russia’s security. Therefore, Russia also got involved in the Syrian war, supporting the legitimate authorities of Syria and entering the war against Turkey. Russian-Turkish relations began to strain. In November 2015, Turkish warplanes shot down a Russian SU-24M plane on the border with Syria. Russian President Putin, calling the incident “a hit from behind” by terrorists, noted that it will have serious consequences on Russian-Turkish relations. Political dialogue at the highest level was suspended for almost half a year. Russia partially froze economic ties between the two countries, leading to a decline in bilateral trade.

The Syrian crisis continues, and although the parties have managed to create certain mechanisms for dialogue, the actual conflict and struggle for opposing interests in the same zone are preserved.

Libya, Iraq, etc. are among the other zones of Russian-Turkish conflict in the Greater Middle East.

One of the primary competitive regions for Russia and Turkey are the post-Soviet Turkic-speaking countries (Azerbaijan, Kazakhstan, Turkmenistan, Uzbekistan, Kyrgyzstan), where each of these two states wants to establish or maintain and expand its sphere of influence. The countries of Central Asia have always been and remain on the list of priorities of Turkey’s foreign policy. To increase its influence in these states, Turkey is carrying out large-scale and multipolar work, striving to strengthen linguistic, religious, and cultural ties with the former Soviet republics of the Caucasus and Central Asia. One of the important steps already taken in this direction is the organization of Turkic countries (originally the Turkic Council) established in 2009, which is joined by all the above-mentioned Turkic-speaking countries, and which has tendencies to form a military-political alliance.

The next stage of the Russia-Turkey rivalry is the South Caucasus. The competition between these two states began as early as the 18th century, when the Russian Empire appeared in the South Caucasus and, pursuing larger geopolitical goals, tried to increase its presence. Turkey views the South Caucasus as a “bridge to Central Asia”. Considering Nakhichevan as the gateway to the Turkic world, Turkey continues the policy of “opening” that gateway to this day. Here, Armenia, which is Russia’s ally in the region, is a barrier on Turkey’s path. After the collapse of the USSR, Turkey regularly tried to increase its influence in the South Caucasus at the expense of the Armenian political factor but was unable to register significant success. Only after 2018, Turkey was able to significantly expand its activities, and after 2020, it was fully involved in all the countries of the South Caucasus, thus also reducing the influence of Russia.

2020 After the 44-day war, the situation has changed quite a bit. Armenia, which, being an ally of Russia, had control over the territories of Artsakh, lost 75% of that territory, and the Azerbaijani side occupied at least 220 square kilometers of the sovereign territory of the Republic of Armenia after the 2020 war. But despite the change in the situation, due to its geographical location, Armenia continues to be an obstacle for Turkey to achieve its expansionist ambitions. It is not by chance that Armenia is called a barrier in Turkish politics, a “damned wedge”.

As already mentioned, Azerbaijan is both a Turkic-speaking and a post-Soviet state. After the 44-day war, Turkey’s eventual entry into the status of Turkey’s “younger brother” of that artificial state could be said to be a card against Russia, as Azerbaijan is currently largely under Turkish influence.

In the South Caucasus, the Turkish side was also manipulating the issue of Abkhazia and Ossetia.

The interests of Russia and Turkey also clash in the Balkans, the Black Sea, Ukraine, the North Caucasus, and all regions where there is a Turkic-speaking population.

A look into the past. something that for some reason almost no one talks about

At different levels in Armenian society, only one episode of the Russian-Turkish conflict, the relations between the Bolsheviks and the Kemalists in the 1918-1920s, is perhaps one of the most discussed topics in different social groups. Discussions are mostly conducted in an anti-Russian context, and these historical short-term relations are cited as the most possible scenario for the development of the current situation. It is almost always talked about the Russian-Turkish cooperation of that time, which was allegedly completely against Armenia. There are points, however, which are hardly talked about or are very little addressed. First of all, it is necessary to distinguish the period of cooperation between the Bolsheviks and the Kemals from the periods that preceded and followed it. In this case, both sides had the problem of coming to power: the Bolsheviks on the Russian side, and the Kemals on the Turkish side. That short period alone cannot, however, accurately and fully describe the nearly 300-year relationship between the two states. The fact that Russian-Turkish relations have been hostile, which we see in various manifestations to this day, was expressed and is expressed in the speech of many political and public figures. Turkish politician and journalist Asım Us wrote: “Bolshevik Russia made us forget the hostility of tsarist Russia towards us.” However, we see that these short-term relations were not stronger than decades of hostility towards each other, many wars, conflicting interests, etc.

Although the current situation is similar in many respects to the cases of 100 years ago, there is no complete similarity. There is a difference in situational contexts that are often overlooked.

Armenia in the process of Russian-Turkish relations today. what should be understood?

Does Russia, which has been in a military conflict with Ukraine for 9 months, need a second front of military operations?

Russia’s more cautious policy in the South Caucasus, particularly with Turkey, is obvious. This is especially evident now when almost all of Russia’s resources are concentrated in Ukraine. Any careless move regarding Turkey could open a new and big front of conflict for Russia.

Another problem for Russia is that Turkey is in the zone of influence of the West. As already mentioned, Turkey is a member of NATO and the West is arming Turkey. In Russia’s foreign policy, we can find many attempts which increase Russian influence in Turkey and remove Turkey from the sphere of influence of the West, mainly in the form of economic cooperation (such as the construction of a joint nuclear power plant in Turkey these days), which, by the way, do not always succeed.

Of course, Armenia has a very important role in Russian-Turkish relations. Russia is the only country that has called the Armenian lands, which are currently the territory of Turkey, “Western Armenia” at the state level. It refers to the resolution on the recognition of the Armenian Genocide adopted by the Russian State Duma.

Thus, Russia and Turkey can be considered conflicting parties, but in some cases, they can cooperate according to the situation and specific context. The stable dynamics of the development of Russian-Turkish relations in this geopolitical situation can be said to be quite relative.