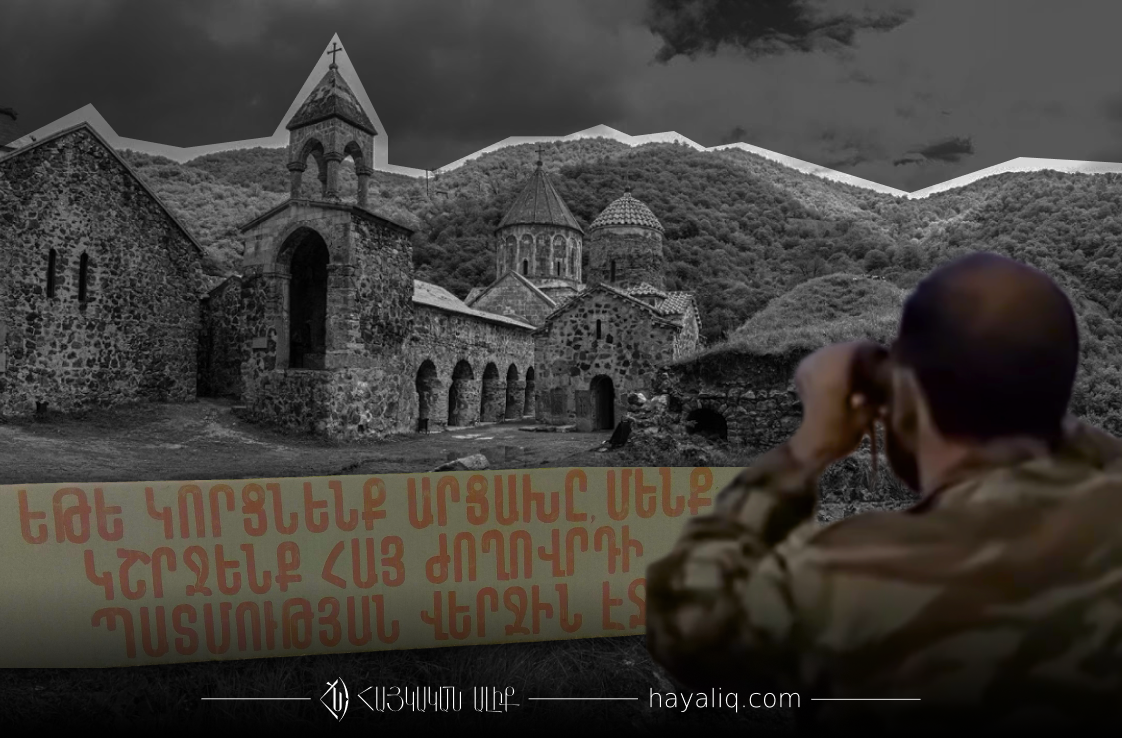 65 years ago on this day, RA national hero M. Melkonyan (Avo) was born in Visalia (Vesalia), California, USA. From the day of Avo’s birth until the Heroic Battle of Artsakh, a lot of time has passed, but the idea of ​​Avoism has remained alive. And what does Avo embody as an idea, what place does he have in the national pantheon of our heroes, and what is the advice of his character, which we also need to realize today?

Until a certain age, M. Melkonyan did not know about his ethnicity. At school, when the teacher asked what nationality he was, the future hero said, “I’m American”, to which the teacher explained that this was not a sufficient answer, because there are Spaniards, French, etc., regardless of citizenship. This was an incentive for our hero to learn his ethnic and linguistic ancestry and, in the true sense of the word, learn them from scratch.

Having already entered conscious life, M. Melkonyan dedicated himself to the protection of the national rights of oppressed peoples and, in particular, primarily the Armenian people. He participated in the defense of Armenian neighborhoods during the Lebanese civil war, then he was one of the active members of the Armenian secret army for the liberation of Armenia. During the days of the Artsakh liberation war, he transferred all this experience to his homeland.

Arriving in Artsakh, his first stop was Shahumyan, which was the first stop for all our devotees at that time. Then fate took the hero to Martuni, where he became the commander of the self-defense forces and the future defense region. Avo was the commander of the military group of the first military operation for the liberation of Karvachar (March-April 1993) and was directly responsible for the central direction (Martakert-Vardenis highway). The love and recognition for Avo were so great among the people of Artsakh that the “local-foreigner” and “Karabakh-Diaspora Armenian” intra-Armenian divisions were quickly overcome, to the point that the local people gave him a separate name, Avo. His reputation was so great that when he was transferred for a few weeks to lead the above-mentioned campaign for the liberation of Karvachar, there was an alarm in Martuni because they thought that if Avo was taken out of their hands, they might lose Martuni, perhaps this time the enemy would succeed in capturing that impregnable region. , which was not successful in the summer and autumn months of 1992.

Now let’s try to understand what M. Melkonyan, as a person and already after his martyrdom, as a character, embodies with his life, biography, and character.

First of all, Avo embodies repatriation and the gathering of Armenians in the Armenian Highlands, the revitalization of the Armenian Highlands. His self-defense speech when he was accused of carrying a fake passport in the French court is known, that “all Armenians in the world have fake passports, as long as those passports are not Armenian.” He was a very descriptive and very bright example of repatriation, especially in the early days of independent Armenia.

Second, Avo embodied the effective synthesis of Diaspora and mother Armenia, having not only Diaspora Armenian but also a great background of global experience, mastering several languages, having traveled to different countries of the world, having fought for the national rights of not only Armenians but also, according to him, other persecuted peoples. Already in Armenia, Avo was able to synthesize all that and effectively localize it on Armenian issues and very often understood them better, due to his global background, than many Armenians, including Artsakh.

Next, let’s mention that Avo embodied the person fighting for Armenian rights. If Hay Dat in Armenia was revised in the military form in 1988, and in the form of a civil movement earlier, from 1965, then Avo had the diasporic background of all this as well. This man’s struggle for Armenian rights and, naturally, against Turkish tyranny, which is the first and greatest obstacle to Armenian liberation, had an older background than the 1988-1991 uprising in Armenia.

The next important descriptive line that M. Melkonyan embodies in himself was being a military scientist (strategist) in the most original and dictionary sense of the word. A few notable episodes of the Artsakh liberation war with Avo’s involvement are worth mentioning here, where his military and planning talent shines.

One such episode is the discussion between him and other commanders, including Martakert Defense District Head Norayr Danielyan, Central Defense District Head Samvel Karapetyan (Oganovsky Samvel), Askeran Defense District Head Vitali Balasanyan, and how to micromanage further appropriation of the territory after the liberation of the district. including the withdrawal of unarmed and armed Azerbaijanis. Opposing opinions were heard that it is necessary to disarm until the last person, because if a peaceful corridor is left, maybe militants will also pass through it. Avo says very clearly that we should let them go, even if militants cross and take military equipment with them because it is less damage than if we have to be stuck in that region for days, worse, weeks. Being a gifted strategist, Avo understood very well that when dealing with the enemy, we have a scarcity of resources, including time, therefore, we must spend them correctly.

Another example is when he, bent over the tank, talks about the fact that Armenia and the Armenian people must mobilize all their strength for that war, regardless of Armenia’s economic complications, and they must suffer for at least a few years, not to dress well, not to go to school, and instead receive a synergy effect, that all the strength of the nation, human, vital, dram, material, technical, will be pushed to that war, so that we can win and only after that we can live more or less more prosperous and more peaceful quiet life.

His words that there should be peace only with our victory, and that peace is impossible without our victory, were highly prophetic and strategic wisdom. Today we are witnessing the sad reality that we were defeated and, of course, there was no peace, because what feeds the enemy’s expansionism is our weakness, and therefore only our next victory, our strength, can guarantee peace. As a “man who has seen life” in the vernacular, this is exactly what Avo warned about with his prophetic words: “… If we do not win this war, … our history, in my opinion, may end. We can turn the last page of Armenian history if we lose this plot of land. I must say that the loss of Artsakh is a huge loss for the Armenian people, which may mean the complete disappearance of the Armenian people in a few dozen years. If the Azerbaijanis occupy Artsakh, the next place is Zangezur. … If Zangezur is taken away, it is clear to all of us what it will mean for our homeland. Everyone should feel how important this is, and everyone should do everything to end this war as soon as possible.”

In another less well-known example, Avo’s prophetic genius is seen. In the video taken in the background of Dadivank, he says that it would be good for the “Azeri” people to understand that this is not their land, it is the land of Armenians, and to stop fighting. The hero understood that if the Azerbaijani people did not perceive Artsakh as their homeland, we would have much fewer complications. It is natural that both during the war and post-war years, the authorities of Azerbaijan had to carry out the opposite work, which we all witnessed. The advice here is that Armenia and the Armenian state had something to do, have, and will still have to deal with a hostile audience, because first of all, the one who has power over human souls, whether they are enemies’ people or their population, has power.

And of course, another distinguishing feature that Avo embodies is human qualities. There are countless stories where he deprived himself and provided the soldiers with clothes or food, felt personal pain for every fallen soldier and, of course, felt sorry for the enemy military equipment, which should have been our commander, but which was carelessly destroyed. Many cases of his generosity towards enemy prisoners of war are also known.

If we sum up all the above features, we should get a short phrase: “ideal Armenian”. The characteristics of an ideal Armenian man, an Armenian commander, and an Armenian person are concentrated in Avo itself, that is, honest, kind-hearted, with intelligence, will, strict when necessary, disciplined, kind, intelligent, and dedicated to our nation, our homeland, having global experience. but not a secular citizen, but a child of his homeland. We will not be mistaken in saying that this ideal Armenian image is the reason why he was perhaps one of the most loved and adored heroes of the Armenian nation and the most hated image of our enemies, Azerbaijan and Turkey.

In the case of Turkey, there is another circumstance that contributed to the hatred towards Avo. Our hero was a descendant of the survivors of the genocide and personified the private failure of the genocidal struggle of the Turks against the Armenians, the ultimate failure of that struggle because M. Melkonyan was the descendant of the survivors of the killed, who returned to the Armenian highlands and who had the will, intelligence and strength to fight against Turkish tyranny and for the sake of Armenian political rights in the Armenian highlands. This is precisely why our enemies had such great, mystical hatred for him…

If today we are searching for an independent or new ideology, then as Garegin Nzhdeh and Hayk Asatryan once recorded the word “taronakanyuntyun”, today we will be able to call it “Avoyantunyunt”, because apart from being the symbol of the ideal Armenian, Avo was also the embodiment of what his entire life only thanks to this we can survive in our homeland, that is, the idea of ​​eternal struggle. From the day he was born until he came to Armenia, he was in a constant struggle to keep his Armenianness and then protect Armenianness and the Armenianness of others. He was the bearer and implementer of the same struggle in Artsakh and continues to this day, even after his death, to be the example and warrior of that eternal struggle because we can be inspired by him and it is because of him that even after his death the enemy is terrified…