The road map of the destruction of the Republic of Armenia 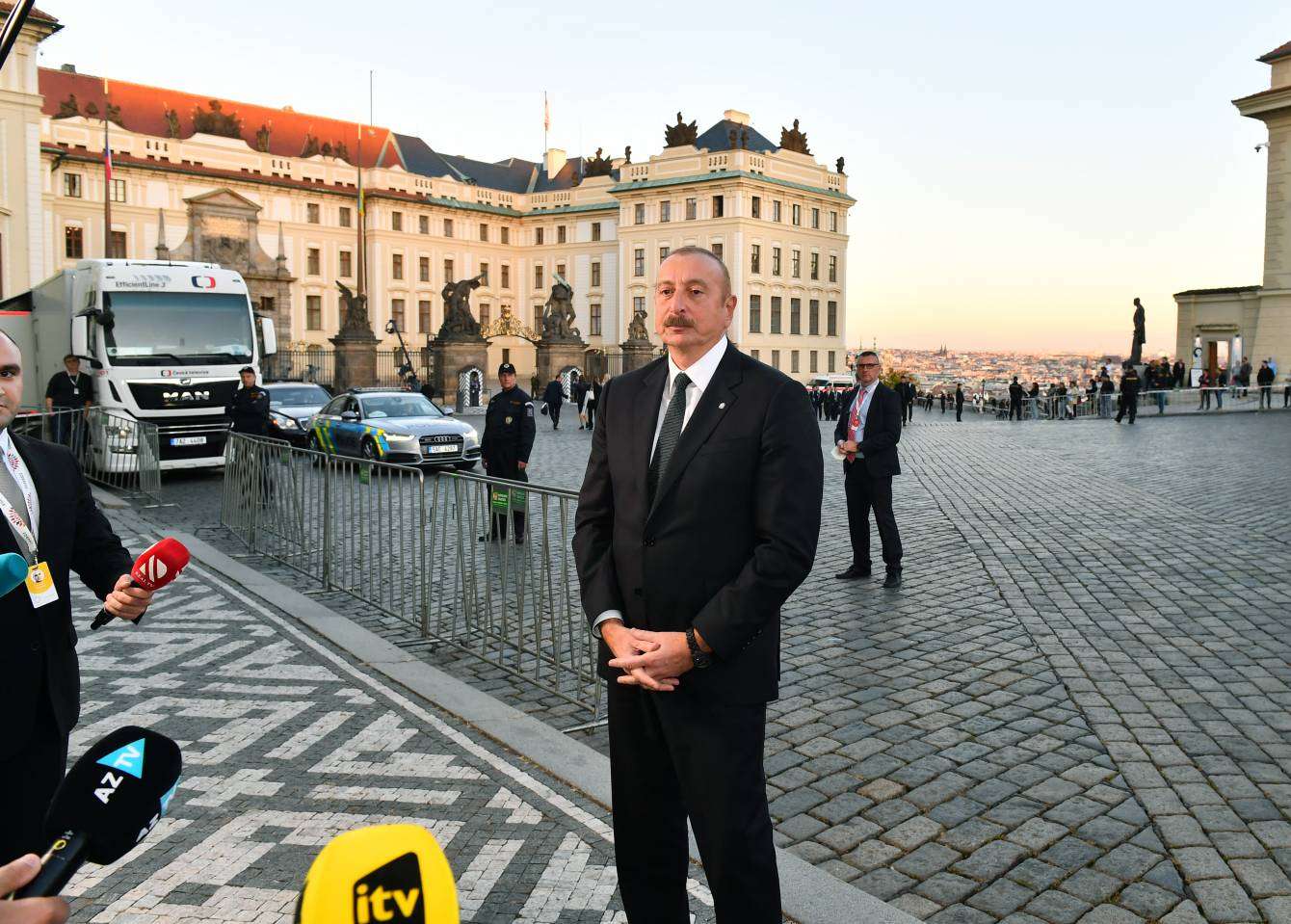 On October 6, President of Azerbaijan Ilham Aliyev, who was in Prague to participate in the summit of the European political community, gave an interview with Azerbaijani TV channels. “Armenian Wave” presents the theses voiced by the leader of the hostile state below, with relevant commentary.

⦁ “In any case, the peace process has already been given an impulse.” Translated into a more understandable language, this means that the 2nd phase of the capitulation has begun. It is not clear what the start of the peace process actually means, when the Armenian-Azerbaijani border is regularly shelled by the enemy with varying intensity, up to a full-scale war, when Armenian prisoners are brutally tortured and shot by the enemy, and Azerbaijani troops are fighting day by day. In the sovereign, internationally recognized territory of the Republic of Armenia, in the occupied territories, the Armenian cultural trace is erased, and cultural monuments are destroyed. Is it possible to reach peace with the enemy, whose plans do not include the existence of Armenia and the Armenian people and whose language of peace is bullets?

⦁ “Armenian armed groups have not been removed from our lands to date. …I hope that this will be put to an end because the entire international community is clearly aware that Karabakh is Azerbaijan.” This proves that the existence of Armenians in the territory of Artsakh is ruled out, because, in case of disbanding the “Armenian armed groups”, i.e. the Defense Army, which is now considered the only real guarantee of the existence of Artsakh Armenians, Artsakh will remain completely defenseless and de-Armenianized, leaving no obstacle for the final conquest. And the de facto authorities are helping Adbejan realize his goals. Let’s remind that since September, there are no more conscripts or contract soldiers in Nagorno-Karabakh.

⦁ “Armenians living in Karabakh are our citizens, and we do not intend to discuss their fate and future with this or that country, including Armenia. It is our internal matter, Armenians will have the same rights as citizens of Azerbaijan. In any case, they can be sure that his life, integrated into the Azerbaijani society, will be significantly better than the current life.” While the de facto authorities, lowering the bar in the negotiations and excluding the discussion of the status of Artsakh, negotiate the right to self-determination of the people of Artsakh and formally talk about the rights of “Armenians living in Karabakh”, Aliyev openly declares that he is not going to discuss the fate of Artsakh Armenians. Even if this is unacceptable for Azerbaijan, the question arises: how much are the de facto authorities going to lower the bar?

⦁ “If Armenia shows goodwill, the peace agreement can be signed by the end of this year. Basically, neither the Armenian side nor the European Union has any problems with the five principles announced by us.” It should be noted that the first of the five principles “acceptable for Armenia” implies “mutual recognition of sovereignty, territorial integrity, inviolability of state borders and mutual political independence”. We should also remember that currently part of the sovereign territory of Armenia is occupied by Azerbaijan due to the aggression unleashed by Azerbaijan in May 2021 and September 2022. A question arises as to which borders will be recognized as the territorial integrity of Armenia. According to unofficial information, the President of Turkey R.T. Erdogan on October 6 in Prague N. During the meeting with Pashinyan, he demanded to accept the location of the Azerbaijani army as a fact and implement the border demarcation. In addition, the conclusion of the agreement based on the five principles will mean the recognition of Artsakh as a part of Azerbaijan and the end of any opportunity to speak about the existence of the Artsakh problem.

⦁ “Of course, the opening of communications is not something that should be included in a possible peace agreement, it should, in fact, have already been done, because it is the honor of Armenia, which it honored on November 10, 2020. which he did not fulfill. And, unfortunately, today, when I appealed to the Prime Minister of Armenia to finally give us a route for the motor road, I did not get an answer again. It is incomprehensible that they don’t want to voluntarily provide us with a highway to Nakhichevan. I am sure that we will achieve it, preferably sooner than later.” Basically, stressing about “not giving voluntarily” and that they “get it quickly”, Aliyev threatens that if it is not given voluntarily, it will be given through new wars, justifying them with “violation of the agreement”.