Berdzor is being handed over to Azerbaijan. What it means and why it matters. - ARMENIAN WAVE
F.A.Q.

Berdzor is being handed over to Azerbaijan. What it means and why it matters. 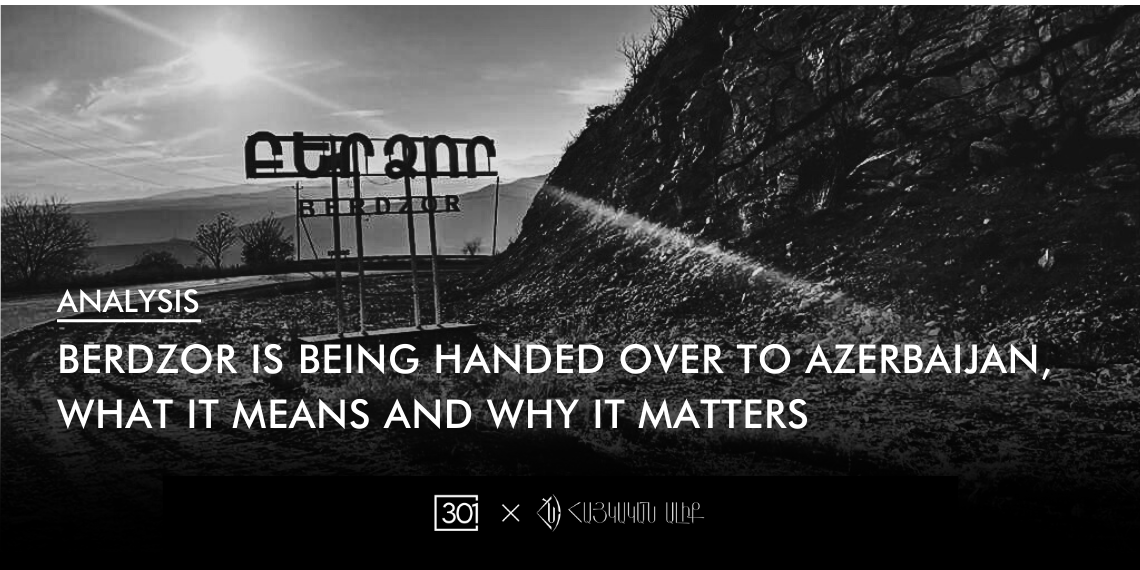 Article translation & cover design provided by our partners at 301.am. Click to view the article in Armenian.

On June 10, RA National Assembly Deputy Speaker Ishkhan Saghatelyan stated at a press conference that Azerbaijan is building a new road connecting Goris with Stepanakert and bypassing the current main highway – the “Lachin Corridor”, which will be commissioned in the upcoming weeks.. As a result, “we will completely lose the town of  Berdzorand surrounding districts, including Agavno, and some other Armenian villages.” In the last several months, independent journalist Nairi Hokhikyan, former NA Member of Parliament Anna Kostanyan, public activist Edgar Kazaryan and others have announced the likely hand over  of Berdzor to Azerbaijan.  The “full-fledged conquest” of Berdzor in the coming period is also being discussed by high-ranking Azerbaijani officials, media outlets, and experts. Azerbaijan has also published photos and videos from the construction of a new road bypassing Berdzor, which confirms the concerns expressed by Armenian figures.

2. Where is Berdzor and why is it important?

Berdzor is located on the Goris-Stepanakert highway, almost at an equal distance from the mentioned Armenian city. This city, which Azerbaijan calls Lachin, was liberated by Armenian defense forces on May 18, 1992, days after the Liberation of Shushi, and finally connected the main part of Artsakh, which was initially surrounded by Azerbaijan on all sides, to Mother Armenia. After that, the city became the center of the newly established Kashatagh District and the highway that passed through it, which was constructed thanks to the panarmenian “Armenia Fund,” became the main infrastructure for transportation to the Republic of Artsakh and still continues until this day. It was due to this reason that it received the well known name, “The Road of Life.” Following the region’s liberation, this city and its adjacent region became the key route for the transportation of electricity, gas supply, and communication cables from Armenia to Artsakh. Due to its strategic importance of the city for Artsakh, since the 1990s, in all negotiation stages, the city and its surroundings under the name “Lachin Corridor” (20-40 km wide) were supposed to be left to the Armenian side as an uninterrupted land link connecting the Republics of Armenia and Artsakh.

3. What has the situation been like following the last war?

Following the Third Artsakh War and the capitulation signed by the de facto Armenian authorities, and the trilateral written statement dated November 9, the 5 km-wide “Lachin Corridor” was approved, which is under the control of the peacekeeping contingent of the Russian Federation. As a result, the city of Berdzor and several villages adjacent to it, although they did not fall under Azerbaijani occupation, are completely blocked by the Azerbaijani Armed Forces and are in an extremely vulnerable position.

The Armenians of Berdzor and its surrounding region were forcibly expelled from their homes in the mid 18th century but since its liberation in 1992 was once again repopulated by Armenians originally from deportees from Armenian-populated settlements of Azerbaijan and Northern Artsakh, repatriates from Syria, Iraq, Russia, and elsewhere. In November 2020, the population of Berdzor was close to 2,000 and with Aghavno,Yeghdzahogh, and Nerkin Sus, the total population of the region was close to 3,000. After the 2020 war, Aghavno and Yeghdzahogh continued to be populated by Armenians but the town of Berdzor is only partially inhabited with around 200 people. Local self-government bodies, some markets, and the church continue to operate. Despite the relatively sparse population, these towns are currently also of critical importance for the Armenia-Artsakh connection, since their presence creates an additional safe environment for citizens passing through the corridor (pass through Armenian towns), which, in turn, encourages greater vigilance of the Russian peacekeepers located along the corridor.

4. How does Azerbaijan want to take the city?

The Azerbaijani government refers to the 6th point of the capitulation document, which states that “with the consent of the parties, a project for constructing a new route along the Lachin corridor must be approved within three years in order to ensure communication between Nagorno-Karabakh and Armenia.” Azerbaijan by its own initiative began building this road, which connects the village of Kornidzor, Goris region with the village of Hin Shen, Shushi, bypassing Berdzor and adjacent villages. Azerbaijan has officially published photos showing that the majority of this route is already operational. According to the trilateral statement, Azerbaijan violated not only the deadlines (the issue of the new road was supposed to be discussed by November 2023), but also a preliminary agreement that the new route should be discussed and agreed by both sides. While both the leadership of the Republic of Artsakh and the de facto authorities of the Republic of Armenia do not publicly discuss any such agreement. However, in response to journalist Nairi Hokhikyan’s request, it becomes clear from the response sent from the office of the de facto Prime Minister of the Republic of Armenia that the town of Berdzor and the adjacent villages will be handed over to Azerbaijan. This may mean that either there is a secret agreement with the Azerbaijani side, or Azerbaijan unilaterally violates the trilateral statement. The de facto authorities of the Republic of Armenia do not react in any way.

There is another important detail that the journalist Vahe Sargsyan drew attention to, as was noted on the official website of the de facto Prime Minister of the Republic of Armenia, the Armenian translation of the 6th point contains the expression “along the corridor,” which contradicts the logic of the original Russian, which defines the corridor not along, but in.  (ռուսերենում՝ «…нового маршрута движения по Лачинскому коридору»)

5. What will the consequences be if Azerbaijan manages to take Berdzor and alter the road to Artsakh?

Azerbaijan’s change of route for the Lachin Corridor will have several extremely dangerous consequences that will create new security and political threats to both Artsakh and Armenia. Here are a few of them:

6. What does the Russian side say?

There have been no new comments from Russia on this issue. Every previous statement has come down to the fact that the parties must adhere to the terms of the trilateral statement of November 9. That is, as in other cases, the position of the Armenian side is more significant. Will the Armenian side fight to ensure Berdzor and the surrounding villages remain Armenian (and cooperate with its strategic partner in this matter), or will it yield to Azerbaijan, thereby depriving Armenia of its next Armenian settlements and transferring new territories?

7. “Why would I worry? We have surrendered so many territories and we will surrender this and live in peace.

Berdzor’s surrender will have grave consequences both in terms of security and the Artsakh issue, as well as in terms of economic and humanitarian implications. This was described in detail in the fifth point. All of Armenia will be affected. After their conquest of Berdzor, Azerbaijan will present various requirements not only to Artsakh, but also to the territory of the Republic of Armenia, as it already does. Further, it will facilitate the advancement of the Azerbaijani side on the internationally recognized territory of Armenia (2020). Since November 2020, approximately 70 square kilometers of Armenian territory have been occupied by Azerbaijan since November. It is unrealistic to expect Azerbaijan to abandon this policy.

8. I understand everything? What can I do as a citizen?

It is a difficult task, but not everything is hopeless.

Berdzor can remain Armenian. Armenia’s de facto leadership has completely abandoned the consistent Armenian position on these and other issues. However, as experience shows, internal public pressure can encourage them to become more aggressive and fight for Berdzor to remain Armenian.

Here are the steps you need to take: