On December 12, around 10:30 in the morning, a group of Azerbaijanis in civilian clothes, posing as environmental activists, again closed the Stepanakert-Goris highway. The road remains closed. Thus, the entire population of Artsakh, about 120,000 people, was under siege. 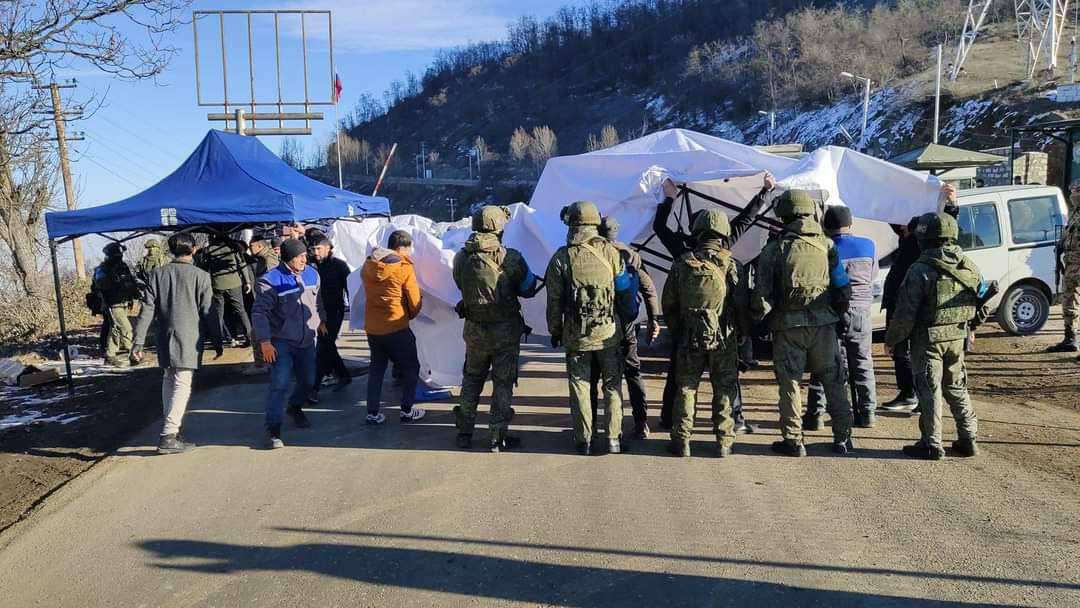 The Minister of State of Artsakh informed that the work of gas-heated educational institutions will be temporarily stopped from tomorrow to save electricity.

Azerbaijani sources report that provocateurs acting under the guise of “environmentalists” will once again spend the night on the Stepanakert-Goris road, keeping it closed.

Artsakh has been blockaded by the enemy for about 33 hours.

Azerbaijan stopped the gas supply to Armenia’s Artsakh. The whole of Artsakh is now deprived of gas supply.

Azerbaijani media report that, in addition to the internal troops of the Ministry of Internal Affairs of Azerbaijan, police forces arrived on the Stepanakert-Goris highway, allegedly “to ensure the safety of the participants of the protest.”

Artsakh has been blockaded by the enemy for about 30 hours.

Artsakh has been blockaded by the enemy for about 27 hours.

During this time, the Artsakh Ministry of Health issued a statement. “As a result of the blocking of the road connecting Armenia by Azerbaijan, the transfer of Artsakh citizens with serious health problems to Yerevan remains impossible… It is worrying that the supply of medicines has become impossible.”

Artsakh HRD Gegham Stepanyan also made a statement. “The Azerbaijanis closed the Stepanakert-Goris road, which is the only one, with false environmental reasons. The created situation leads to catastrophic humanitarian consequences: the supply of food, energy sources, medicine, and necessary food has been stopped, thousands of people are in isolation, and about 1100 people are left on the road in cold winter conditions, without the opportunity to join their families, including 270 children who are currently cut off. are from their families. This is another manifestation of the Azeri ethnic hatred policy, which aims to terrorize the people of Artsakh, to extract concessions from Artsakh on various vital issues under the existential threat, and to impose its will.”

While the Artsakh Armenians, standing alone face to face with the enemy, are trying to face this disaster, the de facto authorities of RA continue to voice their anti-Armenian statements. A striking example is the government’s de facto deputy Gagik Melkonyan, who answered the journalist’s question about whether the Armenian border guards will intervene if the corridor is closed. “No, how can we interfere, what do we have to do with Lachin to interfere, it’s the business of the Russians, we have no right to interfere in that field, as soon as we interfere, they will come and catch us. We cannot intervene with military aid, the guarantors of the security of the people of Karabakh are the peacekeepers, let them protect the people themselves.”

This statement is a vivid example of the anti-Artsakh and anti-state attitude of the de facto authorities and is nothing more than another proof of their immorality. If in their pre-election program of 2021, the latter confirmed that Armenia is the guarantor of the security of Artsakh, now they are satisfied with putting this extremely important issue in the pockets of Russian peacekeepers, the international community, and several third parties.

It has already been found out that the participants of the blockade include Azerbaijani special forces and representatives of special services. There are also many photos where it is seen how pan-Turkist terrorists posing as environmentalists display the symbol of the Turkish nationalist terrorist group “Grey Wolves”.

This proves that the action is not organized for environmental purposes at all. And in general, what does packaging have to do with it, if as a result of this a humanitarian disaster has been created, and our Artsakh Armenian compatriots have been under siege for more than 14 hours? At the moment, the Azerbaijanis continue to add tents on the road, which indicates that the latter is not going to leave there.

And the goals are several, the main ones being:

⦁ provoke the peacekeepers, and discredit the Russian peacekeeping mission in Artsakh in general.

At this moment, more than ever, Artsakh Armenians need the support of mother Armenia and all of us. It is necessary to constantly talk about this genocidal step of Azerbaijan so that every section of society is aware of this disaster and its consequences. If we had national authorities, the alarm should have been sounded at all levels, and our actions coordinated with the allies. However, the fact remains that such a disaster simply would not have happened under the national authorities. And the current de-facto authorities have not only done nothing to prevent this disaster, but they are trying to break Armenia’s ties with its allies in every possible way, while at the same time making vague appeals to the amorphous international community.